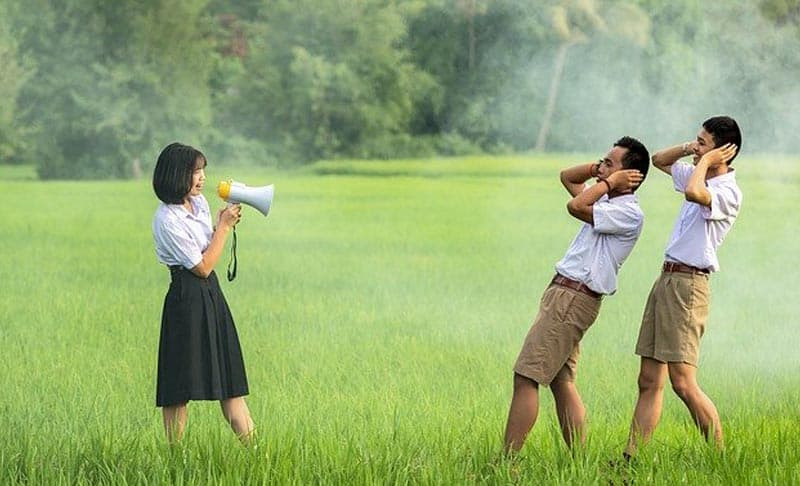 Remember when people would, you know, talk? Communication skills in the communications era are non-existent.

It was a frigid Monday morning in the Adirondacks, and the man who summoned me to his office was my former General Manager.  A good guy who recruited me not once, but twice. Once for his Albany, New York cluster of radio stations. Then, shortly after his own transfer, he asked me to join his station group in Queensbury, New York.

We constantly joked, argued about baseball, even exchanged our favorite moments from the “West Wing.”  Always referring to myself as the Leo to his President Bartlett. So, when I, per his request, entered his office, I didn’t walk as much as I swaggered.

“You’re the smartest dipshit I’ve ever met.” He delivered with dead-eyes.

He then, in what seemed like slow-motion, turned his computer monitor revealing an email exchange he had with one of my clients.

“Scroll down,” he instructed. Shaking his head as a father not upset with his son, just disappointed.

Remember the scene in “A Christmas Story” when Ralphie accidentally loses the lug nuts while assisting his father with a flat?  The “Oh fuuuuuuddgeeeeeuh” scene? Well, like Ralphie, I didn’t say fudge when I saw what I did.

You see, it was the holidays and the client, a do-it-all construction guy, wanted me to create a radio commercial promoting their gift certificates.  I, of course, told the client, “sure thing.”

I promptly wrote up the script, got the green light from the client, and then sent it off to be produced.  Not before my dumbass decided to write to the producer…

“Here is their script. I don’t know who the f&%# would buy a gift certificate for a handyman as a Christmas present, but, I digress…”

The producer cut the track, sent it to me, and without looking, I forwarded the commercial to the client. I was all cheery and charming writing:

“Here you go!  Let me know what you think. Thanks and don’t hesitate if you need anything else.”

However, if the client decided to scroll down a whole half a page, which you know good and goddamn well they did, they would see my aforementioned comments about their campaign.

“Aren’t you a communications major?” My General Manager barked before kicking me out of his office.

Needless to say, the client was no longer my client. And I’m lucky I didn’t lose my job!

Meanwhile, we are, without question, god-awful at communicating. Somehow, in between the invention of the iPhone and Facebook, we all morphed into goldfish with ADHD. All of us  owners of an attention span with a character limit.

This blog post you’re about to read is a series of parables.  Stories of poor communications in a professional world with lessons to be learned from.

Case in point from my confession above — be sure to delete all previous conversations prior to forwarding an email. Or…don’t be an arrogant, cocky douche and respect your clients.

With that — let’s start with…

I recall the audible gasp in the “sales pit” (The part of an office where all the account executives reside)  when we received an email from one of the chief officers–the number two man in the privately owned company we all worked for–informing of us his departure.

He was well liked and respected.  You know, one of those fellas everyone would refer to as a “good guy.”  This email wasn’t just sent to all the radio cluster—Five total in the states of Florida, New York, and Vermont—But all the other industries under the companies umbrella including auto dealerships and hotel chains.

Everyone held this man in high regard.  One person however, held him a little higher than the rest of us. And when she hit “reply all” a few hours and few cocktails after the number two’s email, well…This became the stuff of legend.  Seriously, it was as if she became Snooki after a night of vodka sodas and professed her love to “The Situation.” And all of us saw it. Including the owner.

You get one guess as to whether Snooki is still with the company.

He was one of those guys I did a favor for once. Once! And then behaved as if he was a child entitled to a new Transfomer every time mom went to Walmart for an 8 pack of Charmin.

He is one of those client’s many of us have that expects gifts because he is, well, your client.

Despite all of this, he was a good client. Loyal.  Never busted my chops too much when it came to how much he spent. Never questioned the impact of radio. While the rest of the world was trying to figure out how to promote themselves digitally– he was as reliable as your favorite pair of Levi’s.

One day, I knew I had something special for him.  I worked behind the scenes, for months, trying to land him a stellar pair of tickets to the hottest name in country radio. Or so the program director of my country station told me. I have no clue.

And when I got them, I smiled with a devilish grin, stuffed them in an envelope, put my customary “You’re Welcome” on the outside of our  companies letterheaded envelope and dropped them off in his personal mailbox.

Meanwhile, I’d just sit back, relax, and wait for my gushing with gratitude call.

I proceeded to write him an email that would have made Andrew Dice Clay blush. Obscenities used as adjectives to my vulgar nouns. And then…Then, then I read it over, took a deep breath or 35. Closed my eyes. And hit “delete”.

We witness daily the impulsive responses on social media for the shortest of fuses. The calmest of cucumbers losing their mind and reactively pressing send. Only for their moment of malfeasance to be blamed on an “account hack” via their publicist.

More than likely, you don’t have a publicist.  My suggestion, if you ever find yourself in a situation where you need to respond—do just that. Respond. Then read it. Then send it to a friend, colleague, family member, priest or rabbi. Then, let them tell you what you already know…Don’t even think about sending it to your intended audience.

You’ll feel better. You’ll get it out of your system. And you be all but assured those who look at it will never look at you the same again.

Okay, enough of what not to do, let’s end with one thing to do.

However, when a client would send me an email, you can bet your butt I would respond instantly.  More often than not, those responses were like me–Short and sweet!

Clients would appreciate my timely responses and when I had the time to go into greater detail to their inquiry—They were even more appreciative.

There is a quote, “We can find time to make more money, but all the money in the world can’t buy more time.”

I also asked Jon Gicewicz of J.E.G Design Inc. if he had any advice for any entrepreneur dealing with clients or customers. His response, “It doesn’t matter what time it is or where you are, always respond to the client.”

Value time. Value their time.  And they will be much more likely to respect yours.

One last thing, and remember this—No answer is NOT an answer. It’s just rude.

When I went to school for communications, email was the “thing”.

When I went to school for communications, apps where something you ordered before dinner.

When I went to school for communications, character limits were people who couldn’t have a conversation unless they were six drinks deep at the local dive bar.

Remember this the next time you’re about to forward an email without reading it first.

Remember this the next time you want to reply all as a middle finger to the sender.

Remember this before you write a scathing message to someone who doesn’t live up to your lofty expectations.

And remember all of this when you’re waiting impatiently for someone to respond to your request when you hardly ever respond to theirs.

If you have your own lessons learned from a communication breakdown, feel free to share it in the comments.

And if you want to find out how you can communicate you message via a brand new website or graphic design, contact Jon at JEG DESIGN INC Inc. today!