Storytelling has been part of our existence before even language. Same is true for your website. This blog will show why it's important, and how to do it.

A tourist is backpacking through the highlands of Scotland and he stops at a pub to get a drink. The only people in there are a bartender and an old man nursing a beer. The tourist orders a pint, and they sit in silence for a while.

Suddenly the old man turns to him and goes, “You see this bar? I built this bar with my bare hands from the finest wood in the county, gave it more love and care than my own child. But do they call me MacGregor the bar builder? No.”

Points out the window. “You see that stone wall out there? I built that stone wall with my bare hands. Found every stone, placed them just so through the rain and the cold. But do they call me MacGregor the stone wall builder? No.”

Points out the window. “You see that pier on the lake out there? I built that pier with my bare hands. Drove the pilings against the tide of the sand, plank by plank. But do they call me MacGregor the pier builder? No.

As Andrew Stanton, Academy Award winning writer and producer and director of the most iconic films in the Pixar library of motion pictures, explains in this Ted Talk; storytelling is joke telling.

You have a character. A dilemma. And ultimately, the outcome. Within a few lines, you know all you need to know about this old man (character). People’s lack of recognition for all his hard work (dilemma). And of course, the discovery of his “one time at college” experience with a toggenburg goat (resolution). 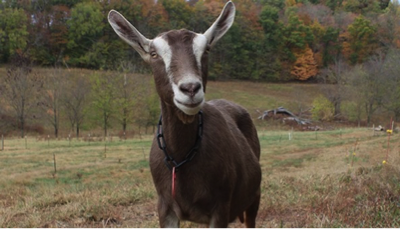 But here is a question I have for you—if we can gather all this insight about this hardworking, devoted, barnyard animal loving Scotsman in only a few sentences, then why do so many proprietors of websites struggle making an emotional connection with their customers?

This blog’s purpose is three-fold:

1. to tell you why storytelling is important;
2. to give an example of a highly successful company who has made storytelling their priority;
3. to teach you how to execute a story that engages and connects to the people who see it.

Since I’m a “why” guy, let’s start with just that, why is storytelling important?

Before people knew how to write, they told stories. Though there is no specific point in which the origin of story was first recorded—Archeologists believe the history of rock art is our first example of story being told.

In an article by the Harvard Business Review, Paul J. Zak explains how the brain’s release of the chemical Oxytocin sends the message that “it’s safe to approach others.” Oxytocin is produced when we are trusted or shown a kindness, motivating cooperation with others. The release of this chemical also enhances a person’s capacity for empathy, the ability to relate to someone else’s emotions.

Zak’s lab also proved that character-driven stories increase the production of Oxytocin in the brain.

Instead of fretting over your competition’s campaign—which I totally get when your site is first created—ask yourself these three questions:

• Why do they care about the service or good you’re offering?
• How does this improve their lives?
• How are they going to feel after they’ve had the service completed or purchased your item?

Okay, that’s the why. Let’s look at a company who displays the art of storytelling and see how their website connects with their customers.

Stories From the Airbnb Community

Traveling is a pain in the ass.

You’re stuck sitting in the middle seat on a cross-country flight between Bubba from ‘Bama and Mary, the devout Catholic who is praying the plane doesn’t crash. When you get to baggage claim, your luggage is MIA. Uber takes forever. And when you wake up in the hotel you found on hotels.com at a blockbuster price, you’re riddled with bites from head to toe, hoping it’s just bedbugs.

Many of you relate to this little fictitious rant – worthy of the Griswolds. It’s because all of these inconveniences have one commonality—they create the components of a story.

Airbnb, the company which shook the hospitality world, gets that. This is why they have a page of their website solely devoted to “Stories from the Airbnb Community.” Tales told by people like you (character), the situation they were faced with (dilemma), and the reason they choose Airbnb (resolution). They’re all first-person commercials/testimonials, sharing their love of the company.

It’s these real-life characters telling their true stories, causing the consumer to connect, and ultimately, leading to their decision.

By the way, this isn’t isolated to Airbnb, a little coffee shop out of Seattle does the same thing. They too understand — when you capture someone’s emotion, you capture the customer, because…

Last year, I was sitting in an entrepreneurial conference in Woodstock, Georgia, listening to the former creative branding director for Coca-Cola elaborate on the relaunching of Cherry Coke at the turn of the millennium.

Astonished by this, I researched this topic extensively to write an original blog for a New York marketing firm as well as a blog for my own personal site.

My research uncovered a man by the name of Dr. Antonia Damasio who conducted studies on the importance of feelings, the emotional state, and how this affected the decision-making process.

Remember this, and marry it to what you just learned about the importance of storytelling. Think about the connection of storytelling to the emotional state of the individual before you read this tale:

You’re the owner of a heating and cooling company in Brandon, Vermont. The winters are cold, and they are long. One Tuesday night in February, the phone rings, and on the other end is Laura. She and her husband Stan have two kids, ages 10 and 12. They’re a middle-class family, both parents work, and they own a small house. Nothing special. It works for their budget, but it still requires some upkeep when necessary.

They’re calling you because a pipe burst in their upstairs bathroom. It has leaked down to the basement all over their HVAC. Not only are they without water, the water just decimated their heating source. And with every second that passes, mold infestation becomes a realistic concern.

Until they called your company.

In a short-time, damage was fixed. Pipes were replaced. The insurance was contacted. And the work was done in accordance with their stipulations assuring full coverage.

The characters were Stan and Laura. The dilemma was the burst pipe. The dramatic resolution was your company showing up and saving the day.

Envision a story like that on your website . . . a story told by people just like your customers (character), people with a need (dilemma), and people whose needs were met by your business (resolution).

That’s impactful. That resonates. And that emotional connection may very well be the difference between customers calling you or your competition.

Stories are wonderful. We consume them daily in a Baskin Robbins assortment of flavors. Whether it’s a dirty joke, a drawing on a cave wall, or a testimonial—we’ve been consuming stories for generations because we love to gobble them up.

And they cause us to take action in our lives.

Then, let others tell your story, and eventually, you’ll have a whole new narrative.